Within the Greek Orthodox faith, Easter is the most important holiday of the entire year. After weeks of careful fasting and prayer during Lent, the Greek people are ready to celebrate Christ’s rebirth with many delicious foods and time-honored Greek Easter traditions of the spring season. Some of the most prominent traditions have developed over the years as the Greek people celebrate this important holiday. 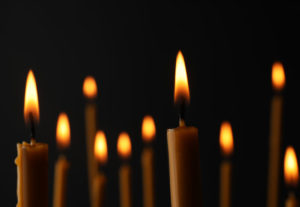 Preparation for Easter, also called Pascha, begins at the start of Great Lent. During this time, Orthodox Christians fast and pray during the 40-day period, and also during Holy Week, the week between Palm Sunday and Easter Sunday. For many, the church service that takes place the evening of Holy Saturday is the most important one.

Odds are you’ve likely heard this popular Greek Easter greeting, “Christos Anesti,” which means “Christ is risen.” This phrase is said often, and followed up with the response of “Allithos Anesti,” which means “Truly, He is risen.” During the midnight service in the Greek church on Easter Day, the church often goes completely dark. Then after midnight, the church is reborn with candlelight as people light their tapers from the candles of their neighbors, all changing “Christos Anesti!”

A Meal of Roasted Lamb

The Greek Easter meal often includes roasted lamb as the traditional meat of choice. Normally seasoned and prepared on a spit, this meal is representative of Christ’s death on the cross as a sacrifice for sinners. The Apostle John called Jesus the Lamb of God, thus serving lamb at Easter honors this. 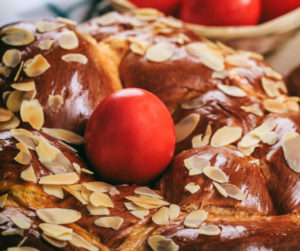 Bye, bye pastels. If you’ve ever attended a Greek Easter dinner, you likely noticed that all the eggs were dyed red. This is because the egg has come to symbolize Christ’s tomb, which was stained red with his blood. This is a visual reminder of the sacrifice He made when he died on the cross.

Another Greek Easter tradition involves the baking and breaking of a special Easter bread called Tsoureki. This traditional sweet bread features several ingredients that were forbidden during Lent, such as eggs, butter, and sugar. This bread is shaped in a circle and topped with red Easter eggs, and teeming with symbolism. The bread itself symbolizes the resurrection of Christ and rebirth in general, as it is molded, rises, and takes on life as it transforms into its final shape. The red-dyed egg, as mentioned above, is meant to symbolize the blood of Christ. Christ is also referred to as the “Bread of Life,” which adds even more meaning to this traditional Greek Easter treat, which helps mark the holiday.

During these strange and trying times, we find it’s even more important than ever to cling to traditions, our family, and our faith. From all of our team at Acropolis Grill, we want to wish you a very Happy Easter, and a lovely spring season of rebirth. Christos Anesti!

March 25th is when Greeks celebrate their independence. But don’t worry, your favorite Greek restaurant will be open!